Ann (‘Nancy’) Lambton was born in 1912 to a very well connected family. She was the granddaughter of the Second Earl of Durham and niece of Viscount Cecil. ("We had 14 indoor servants. I can't think what we found for them to do".) Her father was a famous racehorse trainer (she was born in Newmarket) and her middle name, Swynford, commemorated her father's 1910 St Leger winner. She herself won acclaim for her skill in the saddle, and she later commuted by bicycle to teach and to thrash university squash opponents.

She read T E Lawrence as a child and was fascinated by the Arab world. She studied Persian at what is now SOAS (the School of African and Oriental Studies) and then travelled widely in the region. We will never know, but it is possible that she was influenced by what she read of Gertrude Bell who came from similar North-Eastern stock. Be that as it may, Miss Lambton was accordingly an obvious recruit for the Tehran legation when war threatened in 1939, where was she appointed press attaché and became an indispensable part of the team. She was the only woman in the legation entrusted with work of a ‘responsible’ nature. She was occasionally called upon to act as translator and once had to sit through an inordinately long preamble to a speech by a visiting MP. ‘Now translate that and I will come to the point’, he said. ‘Let’s come to the point first, and then I’ll translate’, she replied so becoming an idol for subsequent generations of bored translators. 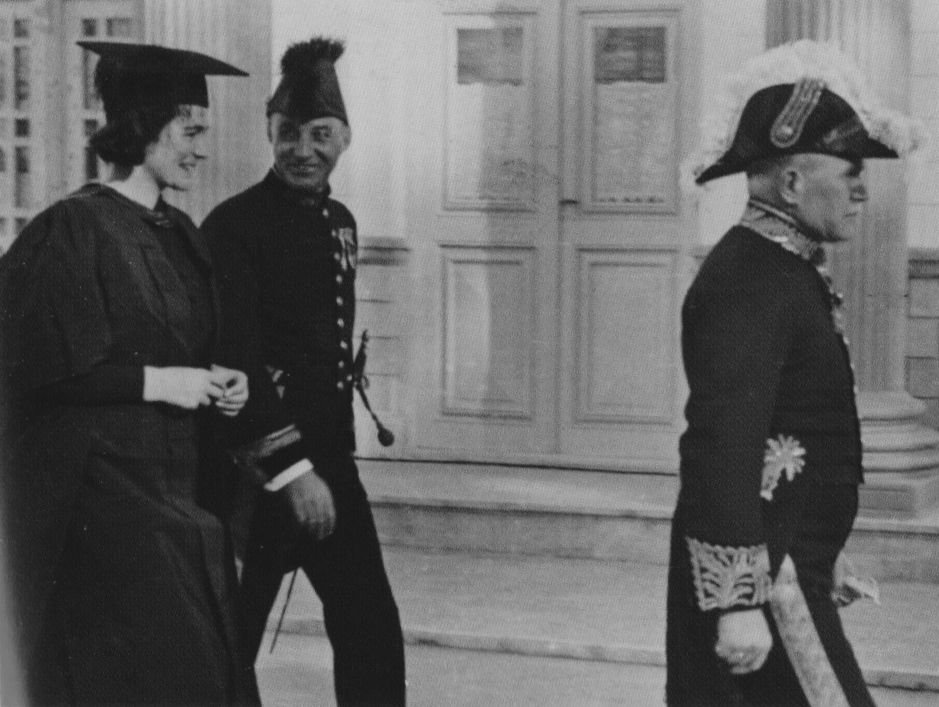 She was senior enough to be presented to the Shah when accompanying a new British Minister who was presenting his credentials - see photo above. But the rather shaken Shah, who hadn’t been warned she would be present, refused to talk to her. (She wore academic dress as no precedent existed for female diplomatic attire.)

She wasn’t too impressed by many of her colleagues. ‘A certain matter I have been working up for months has been nearly wrecked … Some ass butting in instead of doing nothing till I returned as I had said.’ And she referred to the wider diplomatic corps of Tehran as ‘d.d’ (dithering diplomats).

She met Freya Stark a few times, but they were never great friends, Lambton being much more confident, less demonstrative, less interested in clothes, and seeing less need to flatter male egos in order to smooth her path.

She returned to SOAS as a professor after the war and (again unlike Freya Stark) wrote only for academic and Foreign Office consumption, and was very influential in both circles. She taught several generations of diplomatic officers preparing for postings in Iran and Afghanistan, both at SOAS and via her standard texts.

And she was sometimes consulted in times of crisis - her advice in 1951, regarding what might be done about prime minister Mohammed Mossadeq after the nationalisation of the Iranian oil industry, has been described as marking "the beginnings of the 1953 coup". She proposed that Oxford University professor R. C. Zaehner should go to Iran and begin covert operations. In 1953, with the help of the CIA, the regime of Mossadeq was overthrown and the Shah was restored to the throne. Nevertheless, she drew the Shah’s attention to what she saw as the shortcomings of his subsequent reforms. Bruised by her criticism, and having banned her from Iran for a time, the Shah did not speak to her when he welcomed the British delegation to Iran in 1971 for the celebrations to mark the 2,500th anniversary of Persian monarchy. When her kinsman Lord Lambton, then Parliamentary Under-Secretary at the Ministry of Defence, visited Iran in the 1970s, the Shah told him: "Your cousin has given me more trouble than any of my own subjects."

Professor Lambton was therefore initially sympathetic to the revolutionaries of 1979, led by Ayatollah Khomeini, though soon disillusioned. She did not visit Iran after that point: "I have never worn a chador in my life, and I do not intend to start now."

She remained single and unattached all her life, retired in 1979 and died in 2008.

There is a good deal of further interesting information about Nancy Lambton in Helen McCarthy’s excellent Women of the World – The Rise of the Female Diplomat.