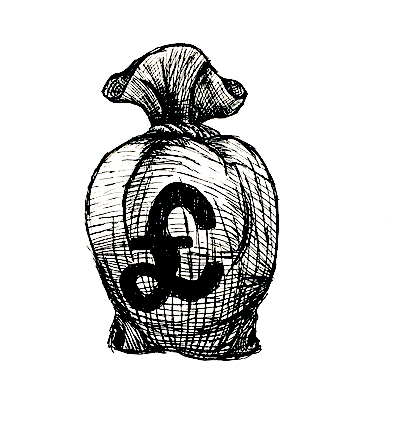 There are around 5.5 million public servants in the UK, but only around 0.4m of these are civil servants. (Click here for further detail.) Civil service pay therefore represents only a small fraction of total public sector pay.

Detailed and up-to-date information about civil service pay (and much else) can be found in the publications listed at the top of this separate web page.

Departments' total pay bills are controlled by the Treasury but they have quite a lot of freedom to set their own pay rates within that total.

Civil service pay has been pretty well frozen since 2010, bonuses have been sharply reduced, and pension contributions have increased. As a result, the real pay of UK civil servants has, like that of most of their private sector counterparts, fallen very significantly in real terms. The Senior Salaries Review Body (SSRB) has calculated, for instance, that the pay of a fairly typical member of the Senior Civil Service (the SCS) will have seen the real value of their pay fall by 20-25% over the four years to 2014 as a result of the pay freeze, inflation, tax and National Insurance changes, reductions in bonuses and increases in pension contributions.

The pay freeze summarised in the previous paragraph did not provoke significant industrial action, nor serious recruitment/retention problems, because UK public sector pay had continued rising during - and for a couple of years after - the 2008 financial crisis, unlike private sector pay.

This chart shows the number of civil servants at each pay level.  (Click on the image to bring up a larger version.)  Further detailed information and charts may be found here as well as in an IfG 'Explainer'. 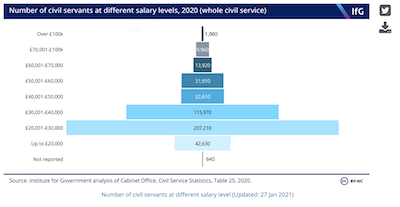 The rest of this note looks at pay across the whole of the civil service. Follow this link for a more detailed discussion of the pay of the Senior Civil Service.

Apart from the Senior Civil Service (see this separate note), there are no government wide pay systems. Subject to Treasury approval, each department is encouraged to establish reward structures and pay scales which meet their own particular needs. A few departments still offer automatic annual progression up a pay scale, but this is discouraged both as a matter of principle and also because it erodes the post-2010 pay freeze. More generally, annual increases in pay scales are negotiated with the Treasury in the form of an annual 'pay remit'. But there is a fair degree of consistency across the main departments (or else too many staff would try to migrate). The results may be summarised as follows.

First, the most senior civil servants are paid less than half of their private sector equivalents. (There a small number of well-publicised exceptions, generally recruited from outside the civil service - see Note 1 below.) But pay rates improve, relative to the private sector, the further one descends through the ranks, to the extent that the very lowest grades are paid about the same as their private sector counterparts. But it cannot be stressed too strongly that such pay nevertheless does remain low in absolute terms, as do the pensions that result from such low paid employment.

The following chart, taken from the 2016 Report of the Senior Salaries Review Body, summarises the position rather well, though please note that the top bar in this chart summarises all public sector pay, not just civil service pay. 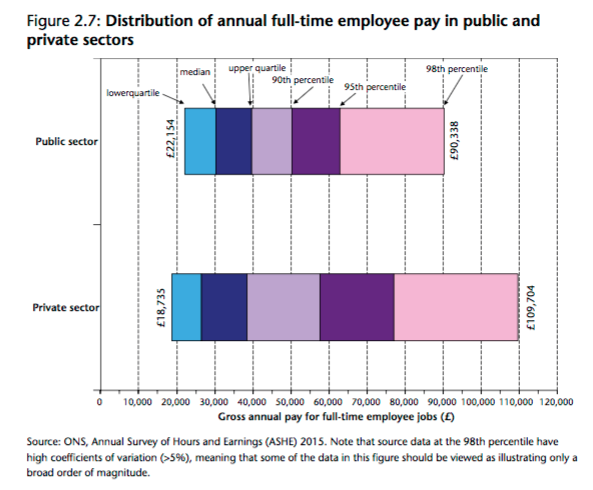 Third, there was for some years a move towards paying non-pensionable bonuses, rather than increasing salaries. However this trend has recently gone sharply into reverse. The original motivation was to save money by reducing salaries and pension payments in the long term, and hence employers' pension contributions in the short term. But bonuses were also intended to reward different behaviours to those rewarded by permanent salary increases:

Salary is intended to reward an individual's value to the organisation and sustainable contribution as a member of the SCS. It should reflect size and challenge of the job; professional and leadership competence; an individual's market value; and track record of delivery in so far as that gives assurance of future sustainable performance.

Non-consolidated bonuses are intended to reward delivery of personal in-year business objectives or other short-term personal contributions to wider organisational goals. Eligibility for bonus should be judged in relation to performance against agreed priority targets, total delivery record over the year, relative stretch of objectives, and response to unforeseen events which affected the performance agreement.

The highest bonuses, in cash terms, were paid to the SCS but bonuses were in practice paid to a high proportion of the SCS, so the average bonus was only around 12% of salary which was in practice far too low to change behaviour. (Private sector bonuses, for senior staff, were typically much higher, and so drove behaviours much harder.) This did not, however, stop media criticism of bonuses being paid to civil servants - especially those in the Ministry of Defence - in the wake of similar criticism of the much higher bankers' bonuses and bearing in mind the low pay of soldiers risking their lives out in Afghanistan. The bonus pot available to the SCS, which was originally supposed to reach 10% of salary, therefore peaked at actual payments of 7.4% in 2008-9. This fell to £2.8% in 2010-11. The percent of the SCS receiving bonuses peaked at 73% in 2008-9, but was only 24% two years later. This represented a sharp reduction in real pay for most of the SCS - a significant contribution to the decline in relative remuneration summarised below.

Fourth, there is these days no more job security in the civil service than outside it:- see separate notes on civil service numbers and Can Civil Servants be Dismissed?.

Fifth, all civil service departments offer national pay rates - as does much of the rest of the public sector. There are strong arguments that this is very damaging both in the South-east and in the regions. Professor Alison Wolf of Kings College, London wrote a thought provoking report on this issue in 2009. She argued that private sector employers who want a good quality workforce have to match or exceed what people can get in the public sector. Poor regions and poor cities typically have bad road or rail connections as well as old industries that have died; one of their few, but genuine, competitive advantages should be lower wage costs to match their lower property costs. By importing national pay scales for large parts of the workforce, we force local employers to match these. In other words, the way we set public sector pay directly increases private employers' costs in our poorer regions and reduces their ability to create jobs for local people. They also incidentally reduce the incentive on civil service managers to move staff out of London to save money. (But see Matthew Parris' column in The Times (6 February 2010) for an entertaining summary of the political and presentational reasons why this pay system will survive for some time yet.)

But Civil Service Chief Executive Manzoni appeared to support regional pay when talking in July 2017.Civil Service World reported that he 'said that while civil service pay levels were a problem, there were parts of the country where its pay and reward offer was “very competitive”. “We’ve got to think regionally at some stage,” he said. Manzoni also referred to existing examples of the pay cap having been broken in return for concessions from staff on working hours and location, such as at the Department for Work and Pensions and HM Revenue and Customs. But he cautioned that the public sector would never be able to compete with the private sector offer in many areas. “So, therefore, we’ve got to work on the importance of the job; we’ve got to work on the flexibilities of the employment terms and conditions,” he said.'

1. It became clear, in early 2012, that a number of departments had arranged to pay certain senior individuals via the individuals' own limited companies. These individuals were not, strictly speaking, senior civil servants as they had not gone through the normal recruitment process, but they worked alongside and were pretty much treated as though they were civil servants. The main motivations behind these devices were (a) to enable the departments to pay the market rate for the job - not the constrained pay of the senior civil service, (b) to enable the individual to avoid income tax and national insurance contributions, and (c) to enable the departments to enter into fixed term contracts with their staff, thus avoiding the danger of unfair dismissal claims if/when the appointments came to an end. Needless to say, there was considerable criticism of departments' willingness to enter into such artificial arrangements so as to avoid the government's own pay restraint, tax and employment law legislation.

2. The Office for National Statistics published a report in July 2011 which estimated that public sector employees were on average paid around 7.8% more than their equivalents in the private sector, but this difference was reversed in the case of more qualified employees. The ONS did not however separate out the 10% of public servants who were in the civil service, and it seems likely that civil service pay has been more tightly constrained than wider public sector pay, if only because it is controlled by Ministers.

3.  There was a period from around 1970 to around 1990 when civil service pay fell very sharply compared with other incomes.  Grade 7 pay fell by around 40%, for instance, as  a proportion of average earnings.  A chart is here.

4. More recently, and over the longer term, civil service pay seems to track changes in the wider economy reasonably well. The most junior officials are currently paid around 50% to 60% of average UK salary, compared with around 40% to 70% in 1986. The equivalent figures for Executive Officers and their equivalents are 80-90% compared with 60-110% in 1986. And Permanent Secretaries, like their private sector Board-level counterparts, significantly improved their position, from around 6 times average salary in 1986 to 8.5-12 times average salary in 2007. (I am grateful to Neil Macaskill for providing these figures.)

5. Useful international comparisons of public sector employment and pay may be found in the OECD's annual publication Government at a Glance.