A wide range of interesting and detailed statistics, and accompanying analysis, can be seen in the various publications of the Office of National Statistics, the Cabinet Office and the Institute for Government (IfG).

What Do They Do?

The IfG chart, below, provides an excellent summary of civil servants' occupations. Note, though, that the division into the various categories is hardly an exact science. Tax specialists, for instance, might also be described as operational staff. The footnotes to table 8 of Civil Service Statistics provide important and useful further detail if you need it.

Click on this image to see the full size chart. 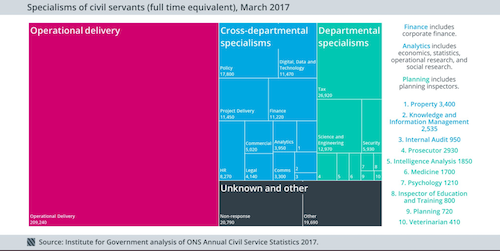 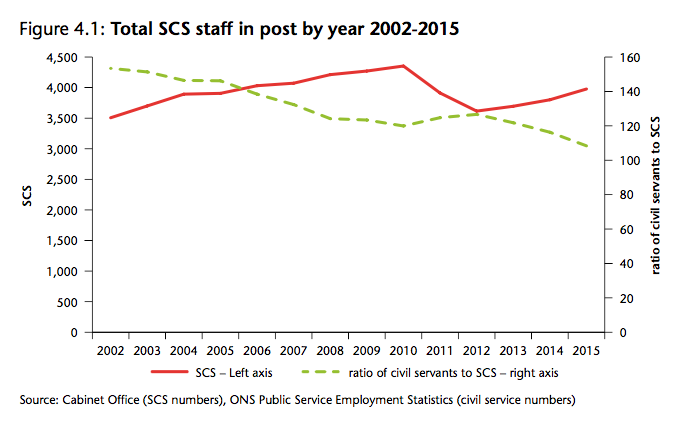 The above chart is taken from the 2016 report of the Senior Salaries Review Body. The upward sloping red line and the downward sloping green line reflects the increasing proportion of senior managers within the civil service.

Information about SCS pay may be found here.

A high proportion of appointments to the SCS are from the wider public sector or the private sector. The Civil Service Commission oversees competitions for the most senior roles in the civil service –  at director, director general, and permanent secretary level – and aims to ensure that key posts are filled on merit.   41% of the competitions it oversaw in 2015-16 led to existing civil servants being appointed.  33% came in from the wider public sector and 26% from the private sector.

The following chart looks at the data in a slightly different way.  It includes recruitment and promotion to assistant director level, but excludes subsequent internal promotions.  The result is a higher proportion of internal entrants to the SCS, but there are still plenty of appointments from outside. 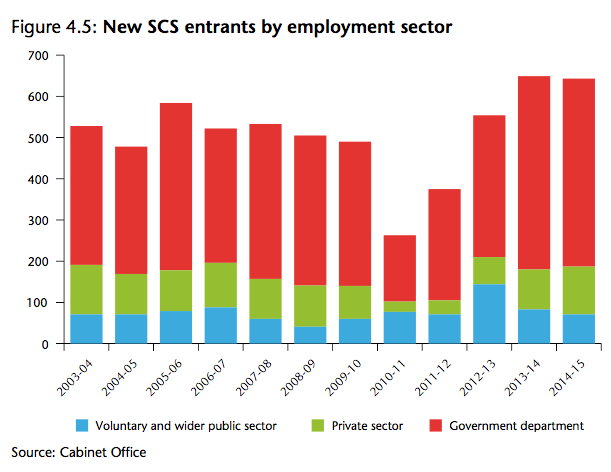 Contrary to its popular image, the Senior Civil Service (SCS) has become less dominated by ‘upper class’ backgrounds than is the case in many other professions. The proportion of ‘public school’ educated top civil servants has declined over the past century (see Figure 1), standing now at only 27% of the ‘Top 200’. 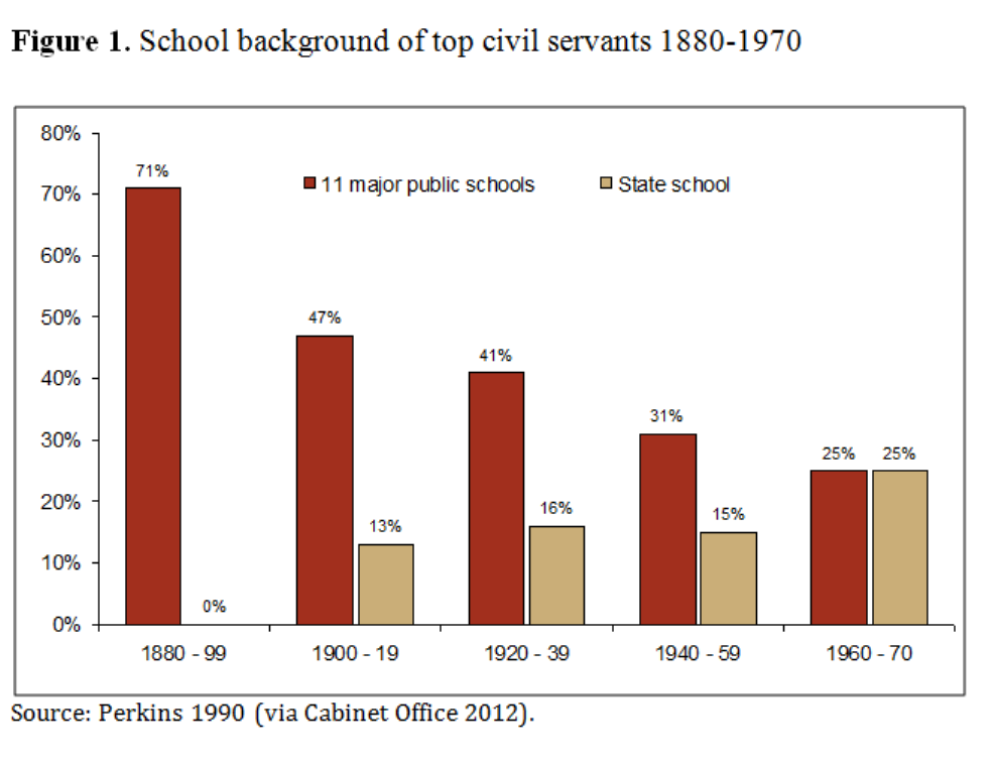 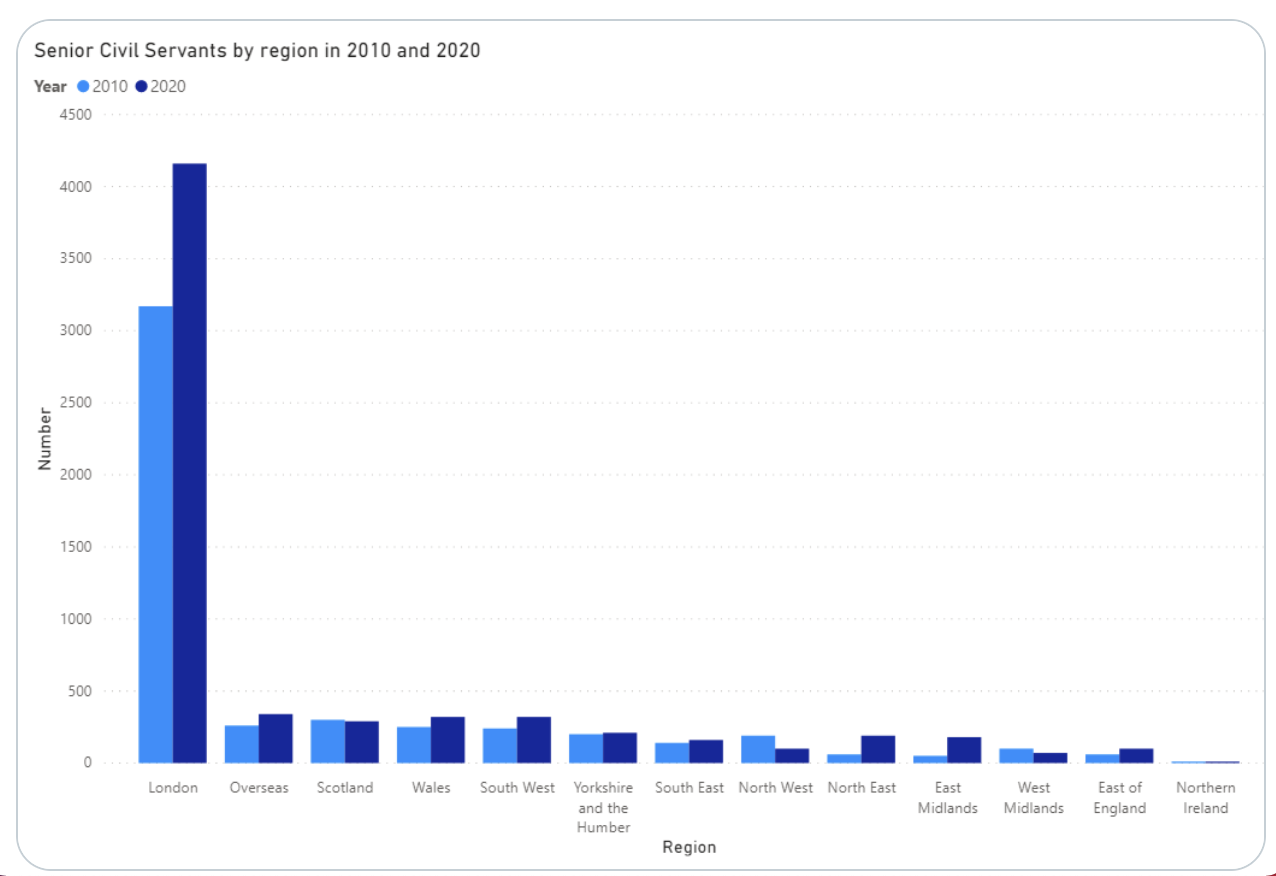 Women in the Civil Service

13% of civil servants are from an ethnic minority background, up from 9% in 2010.  Again, the proportion decreases steadily in the higher grades, with the SCS having the lowest representation rate at 9%

And we are still waiting for the first female and/or ethnic minority Cabinet Secretary. Here are the five most recent ones as at 2017 - from the left: Robert Armstrong, Robin Butler, Richard Wilson, Andrew Turnbull, Gus O'Donnell and Jeremy Heywood.  Jeremy's two successors have also been white males. 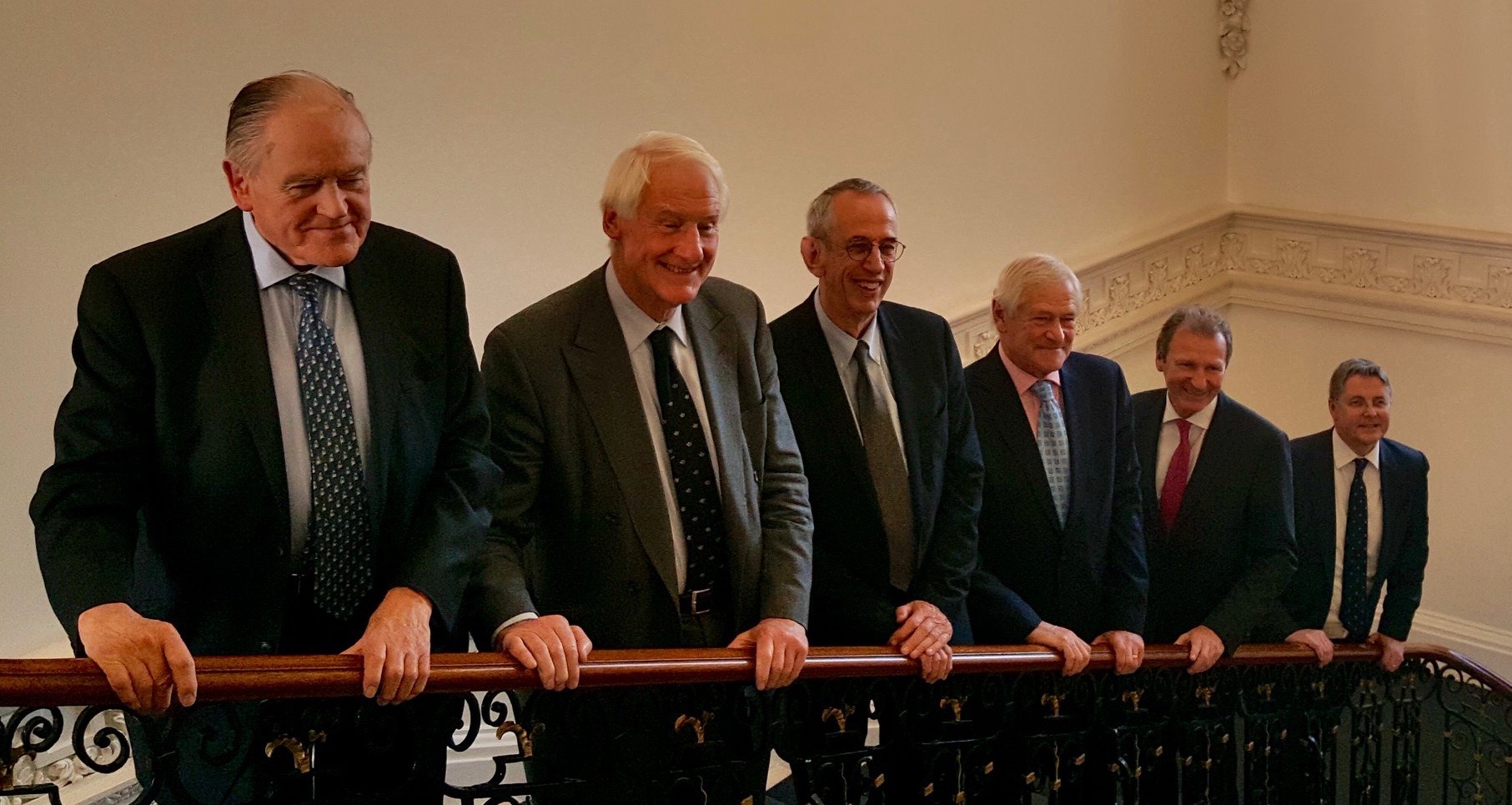 Only c.16% of civil servants retire at or above their normal retirement age. Over 60% resign to follow other careers etc. (See also Can Civil Servants be Dismissed?.)

80% of all civil servants work outside London.

The majority of civil servants work in only five very large departments:- DWP, the Ministry of Justice, HMRC, MoD and the Home Office..

Three or four of the smallest departments have fewer than 50 staff.

Most recruitment to the civil service is carried out by individual departments whose needs vary greatly from one to another, and from year to year. But around 1,000 particularly talented graduates - economists, engineers, lawyers, scientists, generalists and many others - are recruited each year via the Fast Stream Recruitment Scheme, chosen from around 20,000 applicants.

Further detail is also available from the Cabinet Office and Treasury websites, and also in the annual reports of the Senior Salaries Review Body.

The Context for Civil Service Reform 2012 also contains some interesting data and charts.

And an annex to the Oughton Report reports some interesting statistics as they were in 1993.