The demands of the 1939-45 Second World War required substantial change in the civil service, and within Government more generally, including the employment of large numbers of strong characters and experts who would otherwise have remained outside government.  This trend was put into reverse after the war but the experience appears to have informed those who in due course wrote the 1968 Fulton Report which looked at the structure, recruitment, management and training of the civil service.  (It is interesting to note that its authors complained that they were not allowed to look more widely at questions such as the number and size of departments, and their relationships with each other and with the Cabinet Office.)

The report identified the following weaknesses in the civil service:

The report was taken seriously and led to significant change within the civil service, though not to the fundamental - and arguably elitist - Westminster/Haldane Model of government.

But pay restraint together with a wide range of other concerns led to the first ever national civil service strikes in 1973, which in turn led to the Wider Issues Review whose report Civil Servants and Change was published in 1975.

The post-1979 Thatcher government then sought to make progress on two fronts, and the ‘New Labour’ Government, elected in 1997, continued to make significant managerial and efficiency improvements.

... is a somewhat vague phrase which essentially summarises efforts to introduce competition between different public agencies, and between public agencies and private firms, and so incentivises innovation, efficiency and good customer service.  New public management accordingly treats beneficiaries of public services as customers, and citizens as shareholders.  It has been most obviously applied in the health and education sectors, and through contracting out support services.  These reforms – which were continued by all successor governments - are not dealt with in any detail in this website, although it is worth noting that many believe that insufficient effort was put into getting the civil service ready to manage this more competitive environment. This led to significant problems with many of the programs, and to excessive costs being incurred on contracted out services (especially IT) and on consultants who were brought in to help introduce competition.

Patrick Diamond's view is that ...

NPM was scarcely a coherent doctrine. It combined an emphasis on private sector management expertise with theoretical propositions drawn from public choice economics. Bureaucrats were held to be fundamentally selfinterested agents, drawing on ideas advanced by the American economist, William Niskanen, in the 1970s. The aim was to replace the hierarchical public administration of the postwar era with accountable public management where managers were ‘free to manage’ flexible and non-bureaucratic organisations. NPMwas accompanied by cuts in government budgets, reflecting the emphasis of Treasury-imposed efficiency. UK civil service numbers fell sharply from 735,000 to 430,000 by the 1990s.

The political impetus for NPM across western countries was powerful. In Britain, the backdrop was perceived economic decline, a belief that the state was inefficient and must be radically overhauled. The civil service was implicated in the overloaded state and the apparent ‘ungovernability’ of Britain. As befitted the ideas of Niskanen, politicians of right and left became acutely suspicious of bureaucrats. It was believed the government machinery was inclined to crush radical ideas that would shake Britain out of its postwar lethargy. The New Right devised a strident analysis of state failure which influenced the Thatcher administration, even if reform ideas were not always translated into practice.

... the patchy implementation of NPM reflected the doctrine’s inherent flaws. There was a fundamental difference between the public sector and the private sector which NPM advocates refused to acknowledge. Public goods cannot be allocated according to the profit motive. Politics inevitably intrudes on the process of public management. Moreover, the relentless focus on financial efficiency undermined quality and effectiveness. Professor Christopher Hood and his co-author Ruth Dixon calculate that NPM in the 1980s and 1990s ‘cost a bit more and worked a bitworse’.  The aim was to ‘empower’ the public service consumer. Yet NPM enforced the ‘fetish for process’, heralding the relentless rise of the audit culture.  NPMwas oblivious to the complexity of governance in advanced economies.

Efficiency Initiatives:   Separately, the Thatcher Government and its successors have focussed on improving the efficiency of the big, high-spending departments.   Here, the existing civil service has been on more comfortable ground.  It has considerable experience of delivering services on a large scale and in managing large numbers of staff across the UK.  Senior officials accordingly reckon that they can steadily improve efficiency and customer service as long as politicians refrain from changing the rules – or at least don’t do so too often or too dramatically.  There was considerable early success, including sharpened financial management and the establishment of separately managed 'Next Steps' Executive Agencies.  Subsequent reform programs have also been essentially managerial, and have addressed subjects such as leadership, performance management, the role of the Senior Civil Service and improved delivery.

Lord Bancroft's Lecture, Whitehall and Management: A Retrospect, provides a thought-provoking and entertaining review of management reforms through to 1984.

Sir Geoffrey Holland praises the creation of Agencies, but offers a pretty scathing review of privatisation, market testing and contracting out, at pp 45-46 of his 1995 lecture "Alas! Sir Humphrey, I Knew Him Well".

Colin Talbot wrote a brief history of performance management in 2017.

The following is a list of the key managerial reform documents through to 2012.

There is much more detail in these web pages. In particular, Detailed Notes 7 et seq look at the 2012 Reform Plan and the consequences of sharp reductions in staff numbers for the quality of customer service and the quality of advice for Ministers. And Note 16 summarises the introduction of a new vision statement with the promise of the development of a brilliant Civil Service with this new colourful branding:

There is a nice tongue-in-cheek imagination of officials' response to efficiency initiatives here.

Here is a handy IfG summary of key performance initiatives: 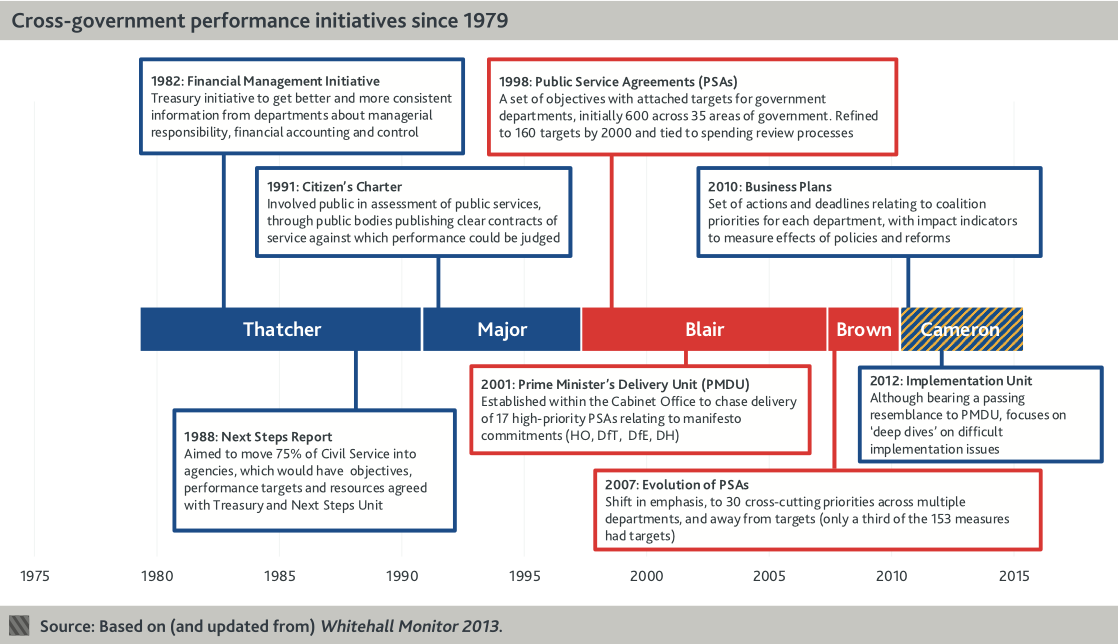 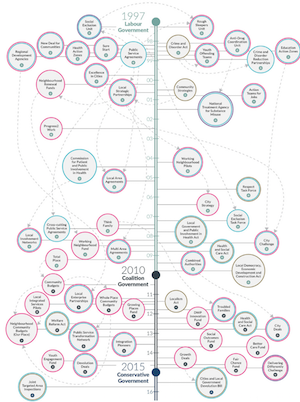 And the IfG in 2018 published a fascinating summary of attempts to join up public services. Their interactive timeline shows the key national attempts to join up public services at a local level from 1997 to 2015. (Click on the image opposite to see a larger screen-shot. You might like to access the IFG website to access interactive detail, clicking on the circles to find out more about the individual initiatives, and related policies.)

The Chief Executive of the Civil Service proudly unveiled Success Profiles a little later in 2018 - a new approach to recruitment within and from outside the civil service. It was very worthy but arguably over-complex, reducing (or rather expanding) common sense into endless charts and detail. Here is one: (Further detail is here.) 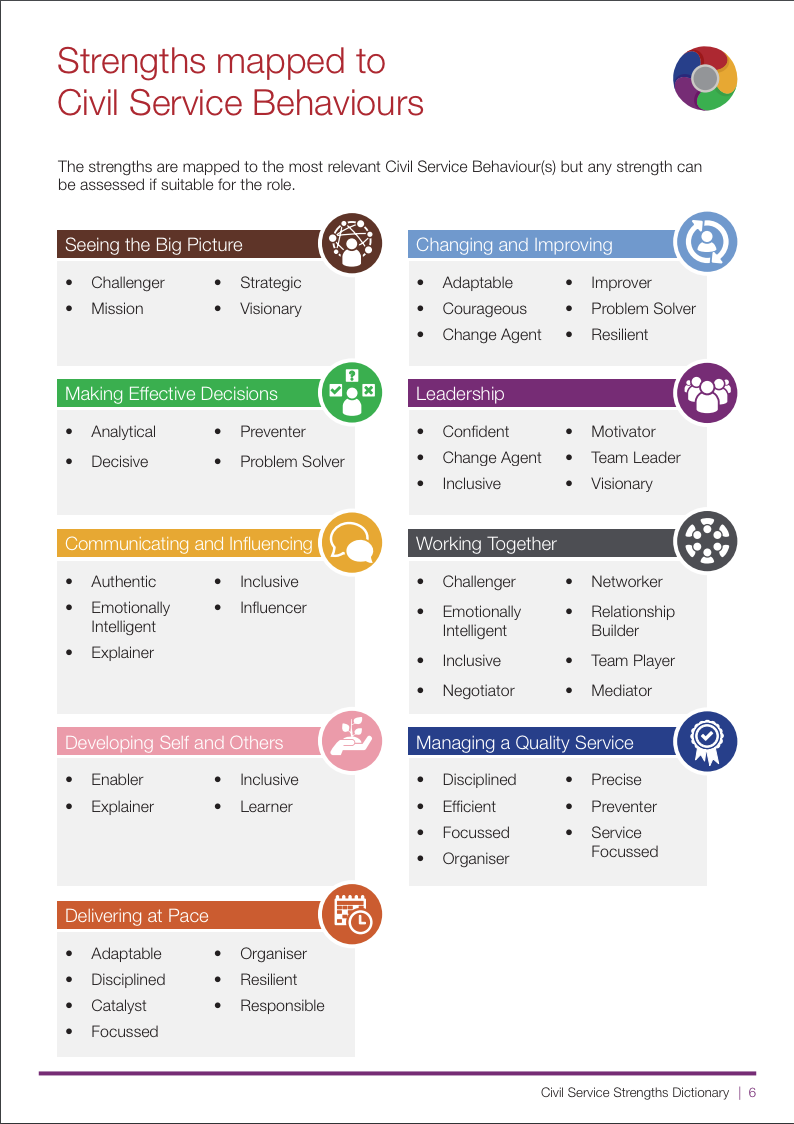 I recommend this discussion of the capability of the civil service as of late 2017.